All applications need to deal with unexpected problems, whether it’s an important service being unavailable or a sudden influx of requests which could overload your application. MicroProfile Fault Tolerance provides annotations which allow you to easily apply common fault mitigation strategies to your application but did you know that, since version 1.1, it also exports metrics which allow you to monitor these mitigation strategies?

The full details of the metrics are in the Fault Tolerance 1.1 spec but here’s a quick overview:

In general, the idea is that if you’re worried about your method failing in a certain way and are using fault tolerance to try to mitigate that, metrics are added so that you can easily monitor whether or not your application is actually failing there.

MicroProfile Fault Tolerance 1.1 is included in Open Liberty 18.0.0.3 and above.

To learn more about what you can do with MicroProfile Fault Tolerance, see:

Gathering metrics from Liberty with Prometheus

Although Prometheus has a basic web UI which can draw graphs from collected metrics, we’ll use Grafana in this article because it has some powerful features such as being able to use placeholders in queries and collect several graphs into a dashboard which can be shared. 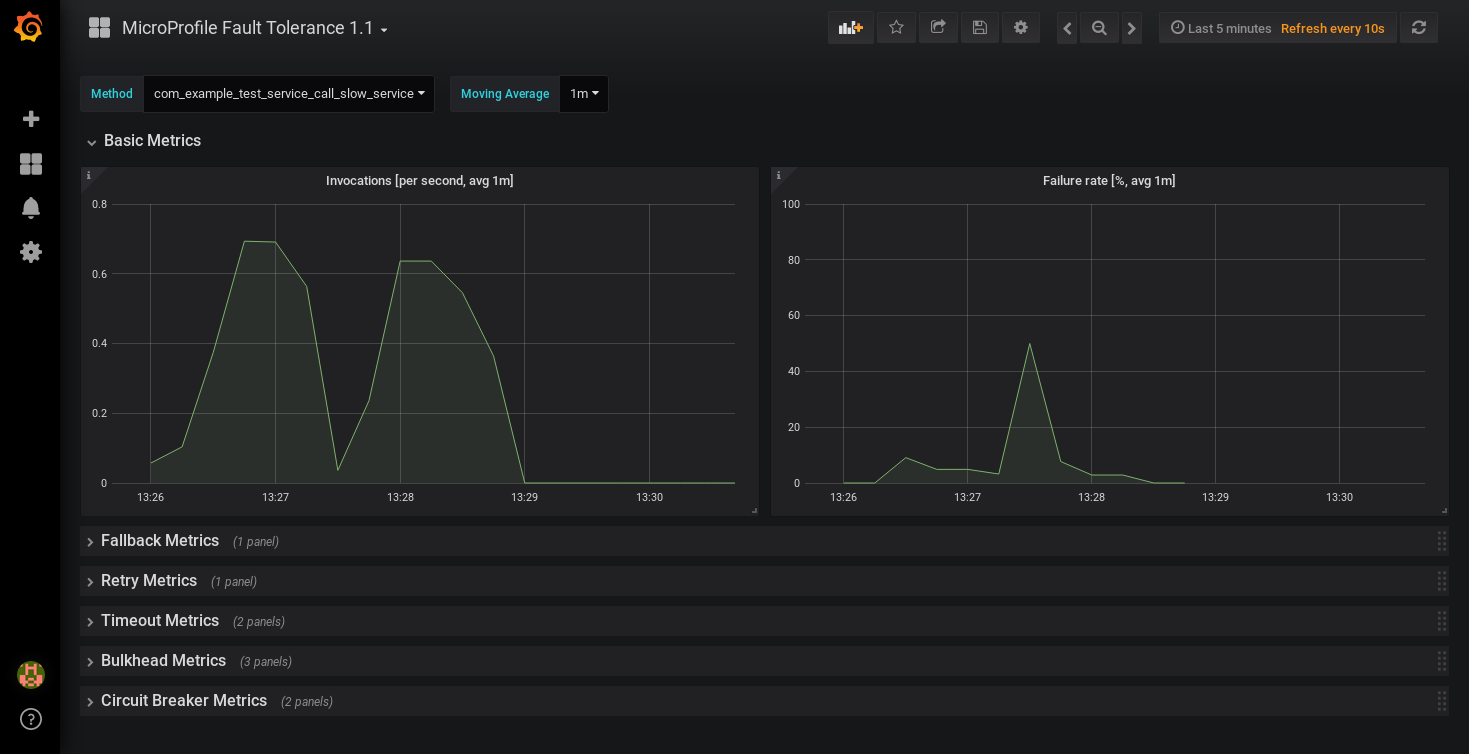 This dashboard shows a selection of graphs for a single method at once. Unless the method is annotated with every Fault Tolerance annotation, some of these graphs won’t apply to that method and will be blank. Since it only shows metrics for a single method, the dashboard isn’t very good for showing an overview of the whole system, but it does let you browse through all the available details when you’re trying to track down the cause of a problem and serves as a useful set of examples for building your own graphs and dashboards.

If you have suggestions for improvements to the dashboard, you can open an issue or PR on github

Creating your own graphs

Let’s take a quick look at how to create your own graphs from the metrics produced by Fault Tolerance. This will allow you to create a graph which isn’t covered in my dashboard, or to extract metrics from several different methods and put them all on the same dashboard.

First, take a look at the Fault Tolerance 1.1 spec to see the metrics which are produced.

For example, here’s the metrics which are produced for methods annotated with @Timeout.

A little detail on the internals is needed here. These metric names are passed to the MicroProfile Metrics API, which then exports them in a format that Prometheus understands and which conforms to best practise for Prometheus metrics.

The MicroProfile Metrics makes the following changes to the Fault Tolerance metrics when exporting to Prometheus:

This means that, if you have a method named callSlowService on a class named com.example.TestService which is annotated with @Timeout, the metrics that you can query from Prometheus look like this:

Now that we have a new empty graph, let’s start off with a simple example. We can draw a graph of the total number of calls to the callSlowService method.

If we load the page a few times to generate some traffic, I get a graph like this: 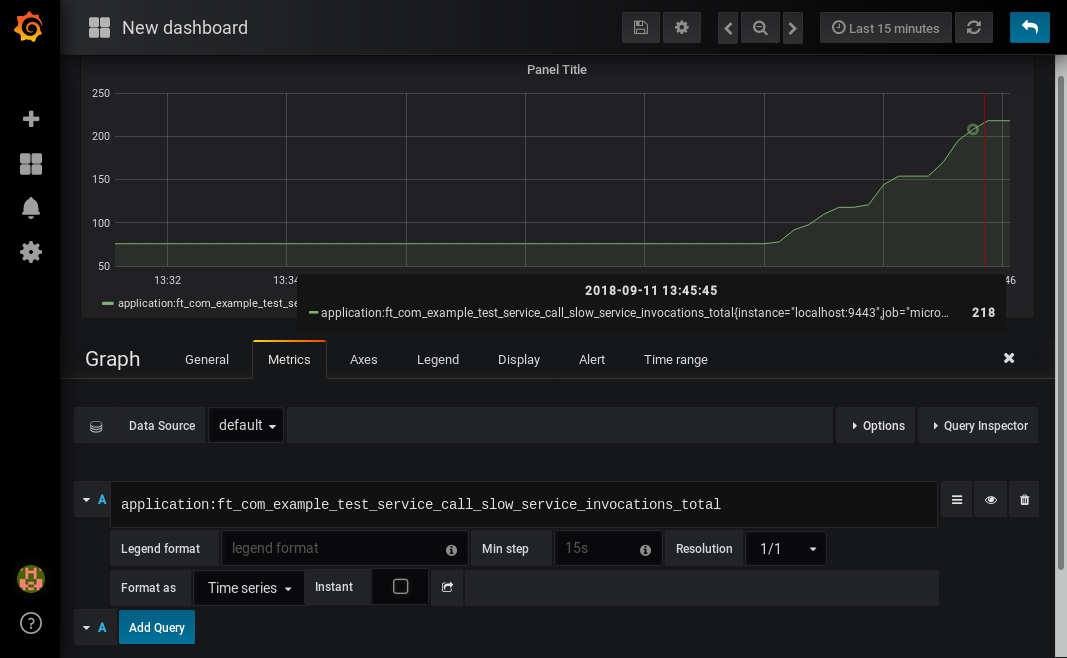 As you can see, it keeps going upward as more requests are served.

What might be more useful is to graph the rate of requests, which we can do with the rate method:

This shows us how many requests we’re receiving per second by graphing the rate at which the total number of invocations goes up, averaged over the preceding minute:

Most of the metrics produced are simple counters which count up by one every time an event occurs. This is format that prometheus recommends as it’s really lightweight on the server, flexible for graphing and copes gracefully with missing the occasional sample or the server restarting. Prometheus stores the value of the counter at set intervals and can then retrospectively process these samples to produce rates of change, moving averages or ratios. However, the downside of this flexibility is that we need to do a little more work, such as using the rate method, when writing the queries for our graphs.

You might wonder why we added together the two metrics rather than using the invocations_total metric we saw earlier. The reason is that if the method was also annotated with @Retry, then each retry attempt would get its own timeout and would be counted towards either the timed_out or not_timed_out metric.

A quick word on alerting

Both Prometheus and Grafana have the ability to create notifications when a metric or a query reaches a certain level. For example, you could create a pager duty alert for the ops team if a critical method is calling its fallback handler more than 10% of the time for more than 5 minutes.

The requirements for alerting are probably slightly different to those used when graphing. For example, if there’s a sudden spike in errors you would want to see that in your graph but you might not want to raise an alert if it immediately settles down again because your automated infrastructure fixed whatever service was broken.

When you’re ready to configure alerts, take a look at the alerting documentation for Prometheus or Grafana to get started.

We’ve seen how the metrics generated by MicroProfile Fault Tolerance 1.1 can be viewed and graphed. We’ve imported a dashboard which allows ad-hoc viewing of metrics for individual methods and have also seen how to combine and use the metrics to create our own graphs and dashboards.