Continuous integration and continuous deployment (CI/CD) is a process in which developers frequently merge code changes into a source code repository, which then triggers code builds, runs security scans, runs tests, and then deploys the application. Automation of this process, through adopting a DevOps culture, tools, and processes, enables organizations to release on a more frequent basis without compromising on quality. Various tools are available to automate the CI/CD process that can be readily integrated into a DevOps deployment pipeline. In this blog post, we’ll discuss how you can use Jenkins to automate the CI/CD process for building, testing, and deploying your cloud-native Java applications that run on Open Liberty. As the CI/CD process is triggered by source changes in Git, this is also known as the GitOps approach to DevOps.

Jenkins is a popular open source automation server that has hundreds of plug-ins to help integrate it into your existing DevOps pipeline. The following diagram shows a simple architecture for a Jenkins deployment pipeline that builds and deploys a Jakarta EE and MicroProfile application in a single Kubernetes environment. When a code change is made in the Git repository, GitHub will trigger Jenkins to build the code, runs JUnit tests and then SonarQube static code analysis scans against the built code. Jenkins then generates a Docker container image of the application with Open Liberty as its runtime, saves the image to a Docker container repository, and then scans the image with Trivy. Jenkins then triggers a deployment by using CLI commands and deploys the Docker container image to Kubernetes. 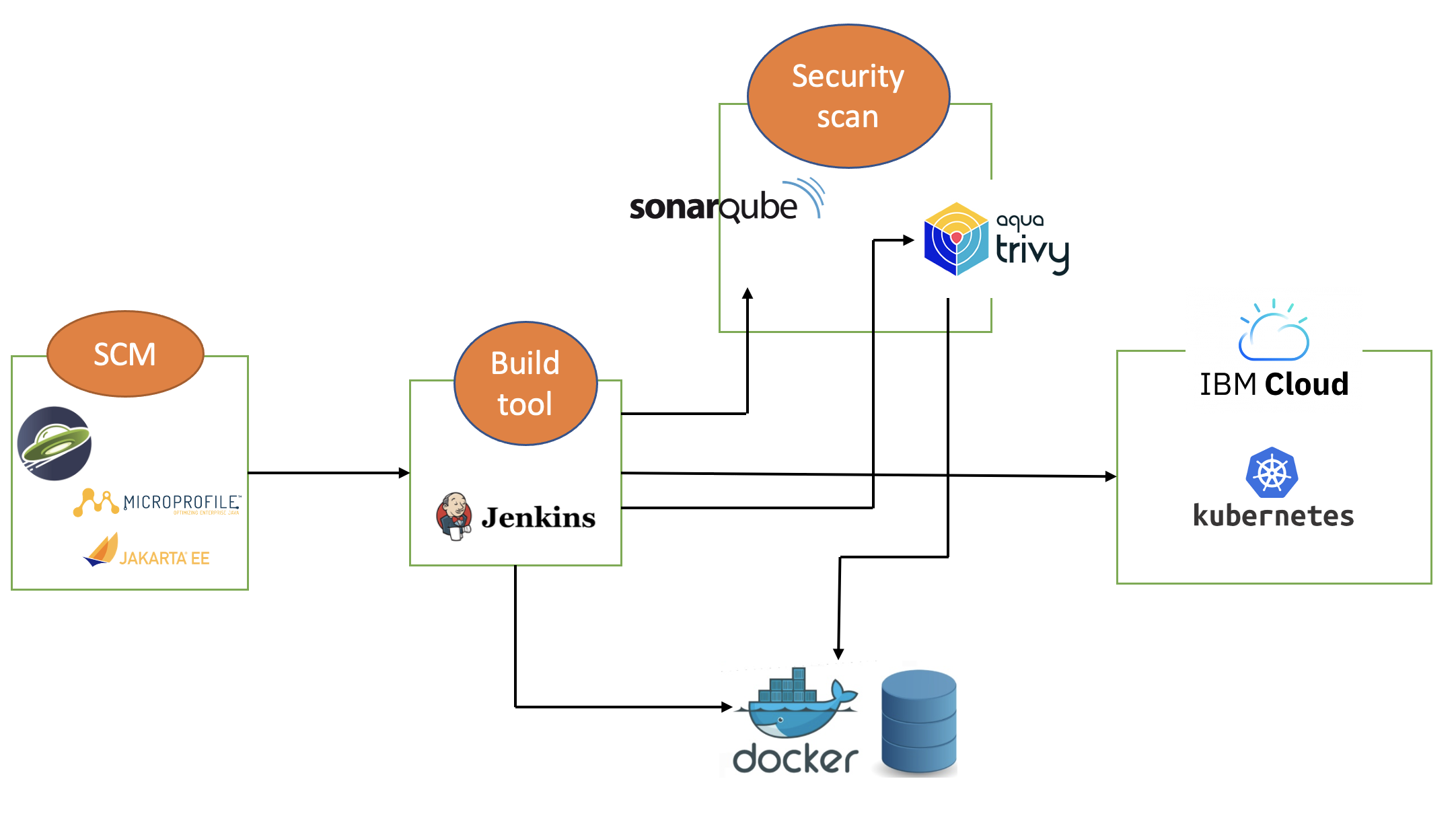 In this blog post, I will assume that you have a basic understanding of Git, Docker, and Kubernetes. I will also assume that the Jakarta EE and MicroProfile application code is stored in GitHub. I will use Docker Hub to store the Docker container images and I will deploy the containerized application to IBM Cloud Kubernetes Service.

Install Jenkins with the following plugins on the base image of your Jenkins container image, or on the Jenkins controller (Jenkins host):

Jenkins builds your Java application code running on Liberty using Jenkins pipeline scripts. The script can run directly on your Jenkins host (also known as the Jenkins controller). If the application requires a lot of memory, you may need to use a Jenkins agent as the job execution environment. For more information about about setting up Jenkins agents, see Using Jenkins agents.

It is a good practice to adhere to the concept of Infrastructure as Code (IaC) when creating DevOps pipelines. Creating Jenkins jobs with pipeline scripts is a good example of IaC.

You can write Jenkins pipeline code in one of the following ways:

Building the cloud-native Java application with Open Liberty on Jenkins

Build your container image using a Dockerfile or a Containerfile generated by the Liberty Starter or by following the pattern described in Open Liberty Images. The Containerize guide is a helpful resource that goes into more details on how to create a container image for applications running on Liberty.

For static code analysis, you can use SonarQube Community edition. The Jenkins client setup details for SonarQube are given at SonarScanner for Jenkins. The following sample Maven command packages the code with Maven and runs the SonarQube scan:

For scanning the container image (for security purpose), you can use Trivy. This scan provides the vulnerability details of open source JAR files that are used to resolve the dependencies while building the application. The following Docker command runs Trivy against your container image:

For simplicity, I will use the command line (CLI) code in a Jenkins pipeline job to deploy a Jakarta EE and MicroProfile application with Open Liberty into Kubernetes. You can also use other tools like Helm, Travis CI, and CircleCI.

See the Kubernetes documentation for other commands.

For example, run the following command in a terminal:

You can generate an authentication token (auth-token) with Postman using the Jenkins login credentials.

You can use the following Kubernetes commands to check the application or cluster logs and the memory and CPU usage:

You can integrate different applications with Kubernetes to persist logs and usage statistics, such as Prometheus and Grafana.

Liberty makes it easy to collect and visualize system and application metrics for observability by using Prometheus and Grafana. You can find guidance and more details in the resources listed here.

You can configure your DevOps pipeline in many ways. This blog post is a quick introduction to how you can use Jenkins to set up a simple CI/CD pipeline to build and deploy your cloud-native Java applications on Liberty.