Before the installation, let’s first create a new project on our OpenShift cluster called jaegertracing:

After the installation of both the Elasticsearch Operator and the Jaeger Operator, check on the Installed Operators page that both are installed successfully. 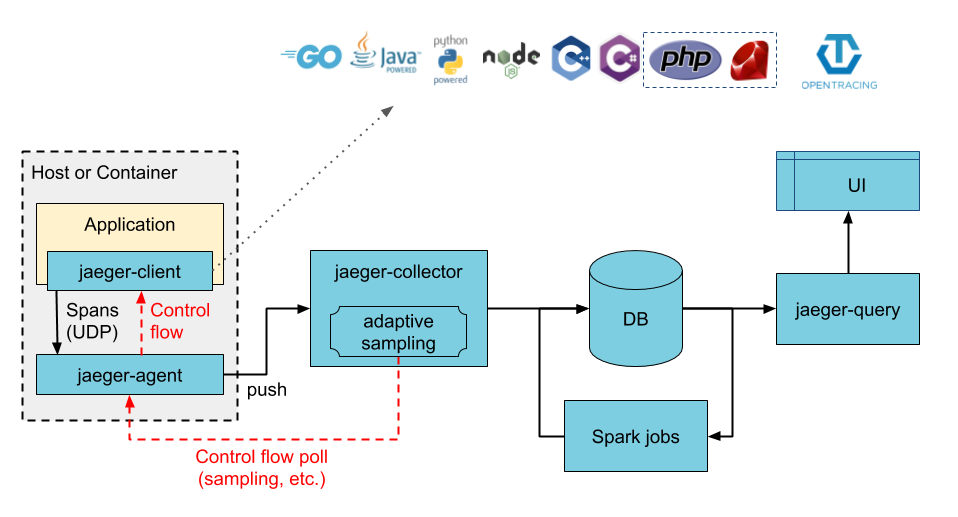 There are three pre-defined Jaeger deployment strategies that are supported by the Jaeger Operator. A deployment strategy dictates how the Jaeger components should be deployed on OpenShift. In this blog post we use the production strategy because it deploys the collector and query processes individually as separate pods on OpenShift, which can be scaled individually on demand. The production strategy also supports secured connections with Elasticsearch. While the default allInOne strategy is an easy way to start and manage all Jaeger components for demonstration purposes, its extremely limited capability makes it unsuitable for even some serious test or development scenarios. In particular, it uses memory as its backend storage so there is no real data persistence, and it does not allow any scaling.

To configure the Jaeger instance, we need to create the following jaeger.yaml file:

Create the Jaeger instance using the Jaeger Operator page in the Openshift console or by running the following oc command:

When the Jaeger instance has been created, the following pod processes are running on your cluster:

Prepare your application for OpenShift

Now we need to deploy a sample application that can create some trace spans for us to test. Open Liberty supports OpenTracing and Jaeger natively so you can write applications using MicroProfile OpenTracing which automatically generate traces using annotations, as described in Open Liberty’s Enabling distributed tracing in microservices with Jaeger guide.

I used the system and inventory apps from the Open Liberty guide and created two deployment YAML files for OpenShift deployment. The YAML files can be found in the sample-deployments folder. Before deploying both the apps to your OpenShift cluster, let’s take a closer look at the system service’s Deployment object spec from the system.yaml file:

In the YAML file, the Deployment controller is annotated with sidecar.jaegertracing.io/inject: "true" so that the agent is injected as a sidecar container within the application pod. If there are multiple Jaeger instances defined in the working namespace, you have to replace "true" with the Jaeger instance name to specify which Jaeger instance you want your application to be associated with.

Now it’s time to deploy both the system application and the inventory application to the OpenShift cluster. Download the system.yaml and inventory.yaml from the GitHub repo. Replace the namespace and the host name with your own values in the Route object spec in both files, then run the following commands:

When deployed, you can generate some traces by visiting the following URLs:

You should then be able to see the trace spans generated by the application on the Jaeger query UI:

Distributed tracing has become essential in the world of observability for microservices. With the Jaeger Operator, most users can now start doing distributed tracing on OpenShift with minimum manual configuration. Yet it still offers tons of configurable options for advanced users to make use of the full potential of Jaeger.

If you want to learn more about Jaeger, the Jaeger home page is still the best resource for Jaeger and Jaeger Operator documentation.